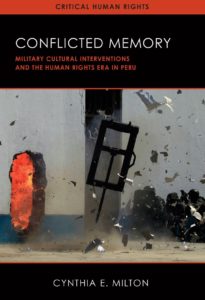 What happens when concepts of “truth,” “memory,” and “human rights” are taken up and adapted by former perpetrators of violence? Peru has moved from the 1980s–90s conflict between its armed forces and Shining Path militants into an era of open democracy, transitional justice, and truth and reconciliation commissions. Cynthia Milton reveals how Peru’s military has engaged in a tactical cultural campaign—via books, films, museums—to shift public opinion, debate, and memories about the nation’s violent recent past and its part in it. Milton calls attention to fabrications of our post-truth era but goes further to deeply explore the ways members of the Peruvian military see their past, how they actively commemorate and curate it in the present, and why they do so. Her nuanced approach upends frameworks of memory studies that reduce military and ex-military to a predictable role of outright denial.

“Brings to light how military ‘entrepreneurs of memory’ strategically place memory products in a memory marketplace. A major intervention in debates about Peru’s internal armed conflict of the 1980s and ’90s and its aftermath, which will interest scholars in many disciplines and regions.”—Paulo Drinot, coeditor of Peculiar Revolution

“This incisive analysis of Peruvian countermemories explores the military’s inability to suppress evidence of past crimes, as well as its clumsy efforts to reclaim heroic and self-sacrificing patriotism by manufacturing cultural memories. Milton underscores the military’s success, however, in reshaping memory politics and current political debates.”—Leigh Payne, author of Unsettling Accounts 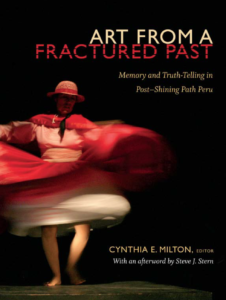 Peru’s Truth and Reconciliation Commission not only documented the political violence of the 1980s and 1990s but also gave Peruvians a unique opportunity to examine the causes and nature of that violence. In Art from a Fractured Past, scholars and artists expand on the commission’s work, arguing for broadening the definition of the testimonial to include various forms of artistic production as documentary evidence. Their innovative focus on representation offers new and compelling perspectives on how Peruvians experienced those years and how they have attempted to come to terms with the memories and legacies of violence. Their findings about Peru offer insight into questions of art, memory, and truth that resonate throughout Latin America in the wake of “dirty wars” of the last half century. Exploring diverse works of art, including memorials, drawings, theater, film, songs, painted wooden retablos (three-dimensional boxes), and fiction, including an acclaimed graphic novel, the contributors show that art, not constrained by literal truth, can generate new opportunities for empathetic understanding and solidarity.

“Are there limits to representation? Is it possible to convey experiences that were unbearable, unspeakable, and inhuman? This collection’s presentation and discussion of grounded, micro-level studies of Peruvian artistic representations show that in spite of all, people can and do express their feelings about violence and horror.”—Elizabeth Jelin, author of State Repression and the Labors of Memory

“Cynthia E. Milton’s stunning, inter-disciplinary collection illuminates how art intervenes in the memory of politics and the politics of memory in post-civil conflict Peru.”—Diana Taylor, author of The Archive and the Repertoire: Performing Cultural Memory in the Americas 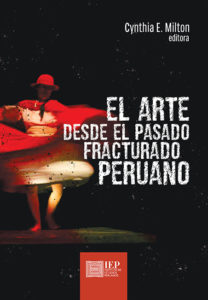 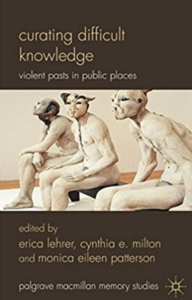 This co-edited book draws from a broad range of  geographical and theoretical material, and explore new ways of bearing witness vis-à-vis curatorial practice, heritage work and memorializing the past, to examine the challenges and limitations of such endeavors. According to Sharon Macdonald (author of Memorylands), “this book exposes and tackles these [questions] brilliantly through excellent discussion of a wide range of provocative cases. It should be read by anybody concerned with the dilemmas of curating difficult knowledge.” 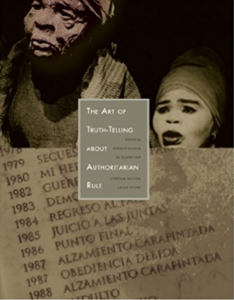 This co-edited book is a comprehensive collection with contributions by scholars, practitioners and artists that explores the theme of truth-telling about authoritarian rule across a range of national experiences, each featuring its own unique set of historical, institutional, and cultural conditions. Nobel Peace Laureate, Bishop Desmond Tutu comments “this impressive anthology proposes cogently and very persuasively innovative and often unexpected ways for tracking down this elusive quarry and in the process advocates a better deal for those who have for so long been rendered impotent and voiceless.” Prizes: Supremes Award 2006 (Univ. of Wisconsin-Madison); Special Interest Honor Book 2007 (American Association of School Librarians and Public Library Association). 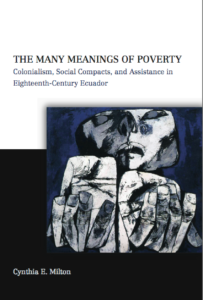 This book analyzes diverse understandings of “poverty” in a multi-racial colonial society.  This study shows that in a colonial world both a blind pauper and a wealthy landowner could lay claim to social assistance as the “deserving poor” while the vast majority of the impoverished Andean population did not share the same avenues of poor relief. Distinct poverty compacts garnered different forms of assistance. According to a reviewer, “this study is original, meticulously researched, engagingly written, and carefully argued. The topic of colonial poverty is also very important. It provides insight into the changing structure of colonial society and the evolving role of the colonial state.” — Kenneth Andrien, author of The Kingdom of Quito. Prize: Conference on Latin American History (sub-group of the AHA) Bolton-Johnson Prize for best book on Latin America published in 2007.

• “Art from Peru’s Fractured Past,” in Cynthia E. Milton, ed. Art from a Fractured Past: Memory and Truth-telling in Post-Shining Path Peru (Durham: Duke University Press, 2014), 1-34.

• with Anne-Marie Reynaud, “Archives, Museums and Sacred Storage: Dealing with the After-life of the Truth and Reconciliation Commission of Canada.” International Journal of Transitional Justice, 13(3), 2019: 524–545. https://doi.org/10.1093/ijtj/ijz027

• “Public Spaces for the Discussion of Past Violence: the Case of Peru,” Antipoda – Revista de Antropologia y Arqueologia, (July-December 2007): 143-68.

• “Poverty and the Politics of Colonialism: ‘Poor Spaniards,’ Their Petitions, and the Erosion of Privilege in Late Colonial Quito”, Hispanic American Historical Review, 85:4, (2005): 595-626.